Up in the sky: it's a nuclear explosion!

Take a look at the brightest nuclear explosion of the century with Michael J. I. Brown, Senior Lecturer at Monash University.

If you live in the southern hemisphere, you now can safely view the aftermath of a nuclear explosion from the comfort of your own backyard.

When we look at the night sky, most of the stars we see are suns. These stars are enormous spheres of hydrogen and helium gas, held together by the force of gravity. At their cores, hydrogen is fused into helium via nuclear fusion, and the energy released from nuclear fusion can power stars for billions of years.

However, Nova Centauri 2013 is a very different beast to the typical star or our Sun. And it won’t be hanging around for long.

Stars can live for millions or billions of years, but they don't last forever. When stars run out of fuel for nuclear fusion, gravity causes them to collapse in on themselves.

For the very largest stars, this results in a supernova, a chain reaction of nuclear explosions so violent the star is largely destroyed.

Stars like our Sun have quieter deaths. The dying star runs out of fuel and collapses into a white dwarf. A white dwarf is a husk of a star, similar in mass to a star but only the size of the Earth.

Some white dwarf stars, including the one that produced Nova Centauri 2013, orbit companion stars. Via the force of gravity, these white dwarfs steal hydrogen and helium gas from their stellar companions.

The gravity on a white dwarf is unbelievable. If you weigh 70kg on the surface of the Earth, you would weigh 7000 tons on the surface of a white dwarf. Hydrogen and helium gas is the fuel for nuclear fusion; because of the immense gravity, the gas is under enormous pressure. Pile enough gas onto the white dwarf and the temperatures and pressures get high enough for the gas to spontaneously undergo explosive nuclear fusion.

Novas, including Nova Centauri 2013, are produced by spectacular nuclear explosions on the surfaces of “dead” stars. These explosions are far larger than those produced by atomic bombs. Indeed, they are so bright they can be seen from light years away.

Show me the Nova

Right now, Nova Centauri 2013 is easily visible in Australia’s predawn skies, towards the south-east and below the Southern Cross. I saw it just this morning from my suburban Melbourne backyard.

If you live in Melbourne or further south, you can see Nova Centauri 2013 in the evening. However, it may be very close to the southern horizon, and stars appear dimmer the closer they are to the horizon, so you may need binoculars.

Perhaps you will glimpse Nova Centauri before it fades from view in the coming days. While our guest may look like an ordinary star, remember it is the aftermath of a nuclear explosion so violent that we can see it over trillions of kilometres of space. 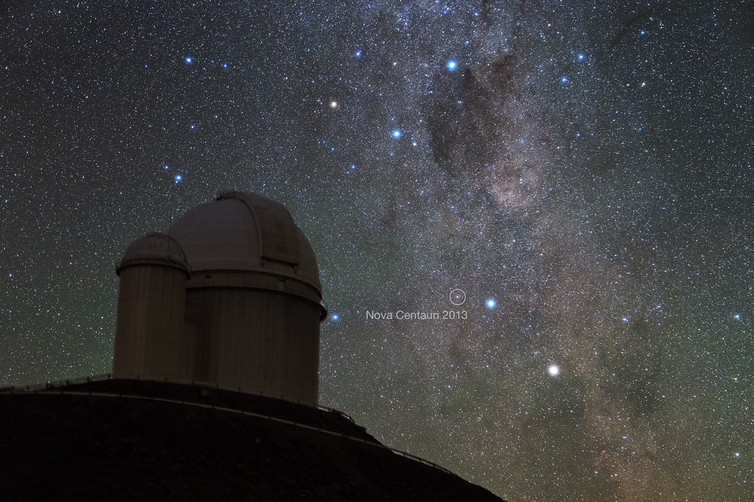