Chat-up lines can be a fun way to get people talking. But they’re so cheesy and insincere. They’ve been used for hundreds of years though so they can’t be all bad, right?

Finding love: what the research says

What's the best way to find a perfect partner? Can social media help? And can a smile work to catch someone’s eye? Dr Danielle Shore and Rachel New from the University of Oxford share their thoughts…

Two people’s eyes meet across a crowded room – they share beautiful smiles and a couple of brilliant lines – and then before you know it they’re living happily ever after.

That’s often how it is in the movies. But what about in real life, seems a lot more tricky than that?!

There’s plenty of advice out there about how to meet the love of your life – but how much of it is actually useful?

“If you want to be successful in getting a relationship, you’ve got to be seen as similar to the person - but you’ve also got to be different from everybody else,” says Rachel New, Research Coordinator for the Oxford Centre for the Study of Intergroup Conflict. “It’s a difficult balance.”

She explains that people can have two different approaches to relationships. Some people are very practical, and consider exactly how the relationship might work and ‘Is this person right for me?’ And others think that the exciting feeling of being “in love” with someone is most important. She adds that young people are more likely to be driven by their emotions when finding a partner.

Many couples meet online – and communication via social media is a big part of a lot of relationships. But Rachel New doesn’t think this is necessarily a good thing.

“It almost creates two separate people, the person you are online and the person you are offline,” she says. “You build up this image of the person you’ve been talking to online, but it’s not really the real person. It’s very carefully edited, it’s the idealised self’ (i.e. a perfect vision of how we want to be seen).

“You’ve got a recipe, and then you actually meet the person face to face… you experience what they’re like, and that’s the equivalent of eating the meal as opposed to just reading the recipe.”

She says that looking for love online also affects how happy you are with your chosen partner.

“There’s a whole thing about the more choice you have, the less satisfied you are with what you choose,” she says. She mentions a study where people were asked to pick out their favourite jam from a selection of either eight or twenty-four different ones. Those with more choice were less likely to be able to make a decision – and if they did, they were less satisfied with their choice than those who were only presented with eight.

Dr Danielle Shore’s work focuses on how we figure out if we can trust other people – and smiling is a huge part of that. She says that we’re actually pretty bad at judging people accurately the first time we meet them, but we get better at it as we spend more time with them. That’s really important when it comes to dating and building a relationship with someone.

“We learn from how they actually behave,” she explains. “Social expressions, especially smiles, are just this incredibly powerful social signal.”

Dr Shore, who works in the University of Oxford’s Department of Experimental Psychology, has done some fascinating experiments that prove this. Her research has shown that we’re even willing to give up money for the chance to see someone smiling at us. 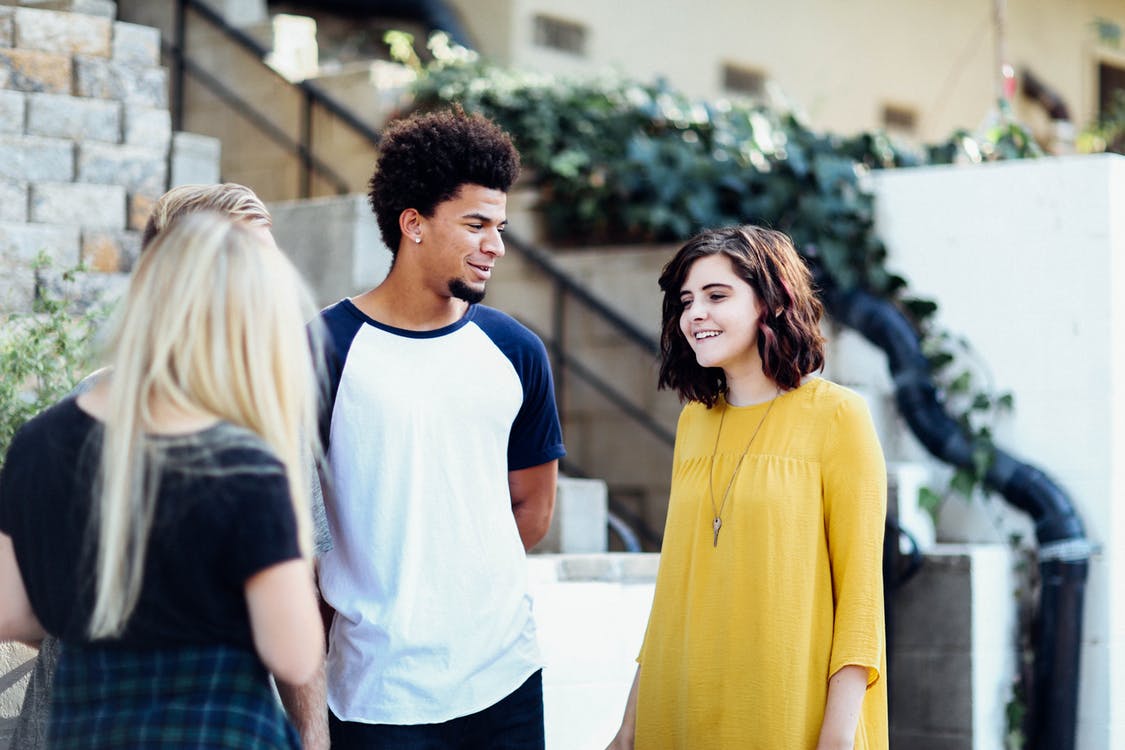 One important thing though, is that there’s a real difference between a genuine smile and one that’s done because it’s expected.

So what does this all mean when it comes to flirting? First of all, if you smile at someone, they’re more than likely to smile back. A smile isn’t a great deal of effort – and it doesn’t make you too obvious, just friendly. Even better than that, you’ll very probably get an immediate response.

“If you want to be successful at flirting, sometimes people think you have to be super-positive,” and show their interest in someone by being over-the-top with compliments. But this isn’t necessarily needed and actually, the other person may be able to see through this (sometimes without knowing it). We respond better to natural smiles and smile back when we see one- we can’t help it!

That’s what science has to say. But what do you think? Is smiling the best way to get someone’s attention? Or do you think it’s better to rely on the power of words?

The science of attraction

Fancying someone is a matter of the heart, right? Not quite. The real boss behind attraction is your brain. It quickly runs through several complex calculations when checking out a potential partner. Author, Dawn Maslar explores how our five senses all play a part.

Telling someone you like them can be scary but spare a thought for the Victorians. Mobile phones and online dating hadn't even been imagined yet, let alone invented. But they weren't short of an idea or two to help make a success of their love lives!

We have to bear in mind that compared to today, nineteenth-century society was generally much more formal and restrictive in the way that it viewed romantic relationships. Openly flirting or going on dates with more than one person was really frowned upon, and all such relationships were expected to lead as quickly as possible to marriage.

This was a particularly big deal for Victorian girls who were not meant to have more than one love interest and – apart from the very richest ladies – they had a lot less independence than the women of today. As a result, the majority of women were keen on finding a nice husband with a good job, to ensure that they had a secure and comfortable future.

In such an atmosphere, how could you tell someone that you liked them, and more importantly, how could you get to know them better without everyone gossiping about you?

To make it easier to tell someone that they’d caught your eye, Americans came up with the clever idea of ‘flirtation cards’. These were modelled on the small, attractively-designed cards that the Victorians gave to friends and relatives on a variety of occasions: to express sympathy or affection, and to let each other know that they were in town and would like to meet up.

Flirtation cards had a different kind of message, not too far away from text-speak in some cases. For example, “May I C.U. home?” was a common line on these cards.

Flirtation cards were usually passed between a man and a woman who might have met at an evening party or during a walk in the park if they liked the look of one another. A typical scenario would involve them seizing the opportunity to secretly communicate as they moved past each other – the man would quickly but subtly pass the flirtation card to the woman. The woman could then respond in a number of ways to let him know whether or not she liked him too. She could smile back at him, or pass her own card to him, which could either continue the flirting or let him know that she wasn’t interested.

Another option that women could use was to flirt involved using their fans and handkerchiefs, which might seem a little strange today!

Well-mannered ladies always carried a prettily-decorated fan and dainty handkerchief with them wherever they went. These were especially handy when attending parties warm, busy ballrooms.

The way women used their fans and handkerchiefs was almost like a semi-secret language. If a lady drew her handkerchief across her lips or folded it while an attractive man was watching her, it was a sign to him that she was keen to chat. Drawing it across her forehead was a warning that they were being watched, whilst carrying her fan in her right hand in front of her face meant that the man should follow her. You could even convey deeper messages with these codes: for example, drawing a fan along your cheek was a way of telling someone that you were in love with them, but drawing it through your hand said that you hated them! 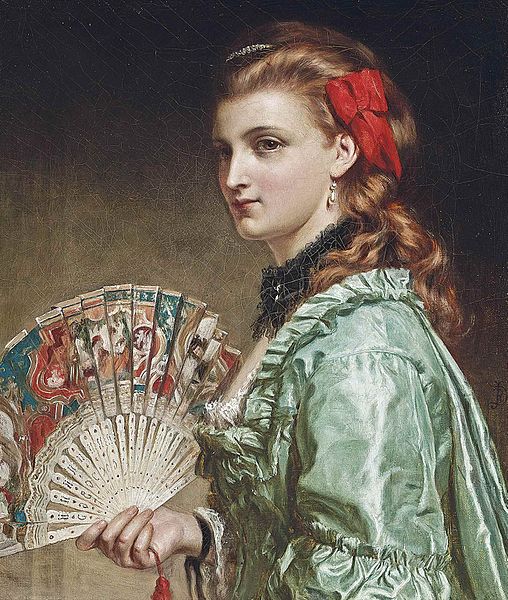 If things seemed to be going well, instead of going on dates, Victorians ‘went courting’.

A young man and woman who were interested in each other could meet and get to know one another at the homes of their mutual friends or family, and chat politely over tea or at an evening party. They were never meant to be left alone together. If they went out and about, the girl would often have to be accompanied by a ‘chaperone’ (usually an older female relative, who would supervise the couple’s behaviour!).

People from poorer or working-class backgrounds actually had more freedom to mingle than wealthier couples, but in all cases, there was an expectation that the couple would marry soon. This often created a lot of pressure on new relationships and left little room for privacy. 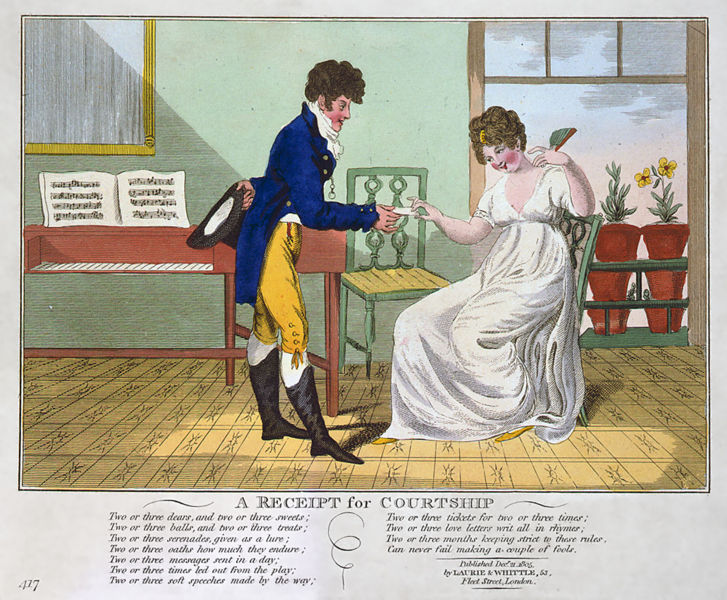 "A receipt [i.e. recipe] for courtship"- a cartoon gently making fun of the courting traditions of 1805 England (published in Dec 1805)- via Wikicommons.

The letters of love

Victorian couples could get around these challenges a bit by writing letters to one another. A wider section of society was educated in this period, and the postal service also developed significantly. This meant it was much easier to write and send letters to your beloved wherever they were.

If you were stuck for words to impress your sweetheart, you could even copy romantic lines from one of the many letter-writing guidebooks that were popular in the eighteenth and nineteenth centuries. How about this for a chat-up line:

“Your beauty is the Clue that guides my Heart thro’ all the winding Labyrinths of Love”!

If that wasn’t enough, flowers could also be used as romantic gifts. Victorians were aware that different kinds of flowers (and ways of arranging and giving them) could convey meaningful messages. For instance, giving a bunch of different-coloured tulips to a girl was a way of telling her that she had beautiful eyes.

If all of this impressed the girl enough to make her want to get engaged, then Samuel Richardson’s guidebook, Familiar Letters for Important Occasions even included an example of how she should write to her father to let him know that she had been proposed to.

Do you think any of these flirting strategies would work with modern couples? Can you see how they might have helped shape how people communicate today?

One possible origin of the word flirt is the Old French fleureter, which means "to touch a thing in passing" - sometimes used to describe bees skimming from flower to flower.

One possible origin of the word flirt is the Old French fleureter, which means "to touch a thing in passing" - sometimes used to describe bees skimming from flower to flower.

Chat-up lines from across the world

They say there's a language of love...what do you make of these chat-up lines from across the globe? Oxford University staff and students share their favourites.

People throughout the ages have come up with rules and theories about how people relate to one another. Literature has a lot to say about flirting, so maybe it's a good place to start if we want to understand some of the ways people have tried to attract a partner in the past.

Should you ever fall for a chat-up line?