Can’t explosions both make and break things? Perhaps it depends whether they’re accidental or not. And are we talking about explosions in nature or man-made ones? Why don’t we dig a little deeper…

Why do we have explosions and how are they created both in nature and by humans? This article takes us on a whistlestop tour of all things that go 'bang'!

First, we need to address what defines an explosion. An explosion occurs when a large amount of energy is released into a small volume of area in a very short time. This release of energy can be mechanical, chemical or nuclear. Whether the nature of the explosives is natural, like volcanoes, or man-made, like bombs, the violent burst associated with explosions makes us think of them only as a tool for destruction. But when it comes to explosions there’s more than meets the eye. When used in a controlled manner, explosives not only can be beneficial and useful but even pretty! And, if we go a little further, a particular type of explosion might be the reason that we’re all here...

Why do explosions take place?

The power of Mother Nature

First of all, not all explosions are man-made. Volcanoes are one of the most powerful representations of mother Earth’s power. As majestic as an eruption can be, they can be terribly damaging. The nature of why eruptions occur is diverse and complex. Underneath the Earth’s crust, there are layers of molten rock. Due to the high temperatures, this rock becomes a flowing substance called magma. With time, gasses are released which increases the pressure in the magma chambers until eventually, this magma pushes through to the Earth’s surface. Magma that has erupted is called lava.

How explosive an eruption is depends on the viscosity (thickness) of the magma. If the magma is thin and runny gasses can easily escape.  This type is not as dangerous since this ‘runny’ lava does not flow that quickly and so you could potentially outrun it should you come near it. The situation is a lot more dangerous when the magma is thick since the gasses cannot escape until the build-up pressure make them do so violently. This type is known as an explosive volcanic eruption. It can be extremely dangerous due to pyroclastic clouds (clouds of ash and hot gas that can reach 1000°C) which have the ability to destroy everything in its path and the subsequent blankets of ash suffocate any life beneath them. 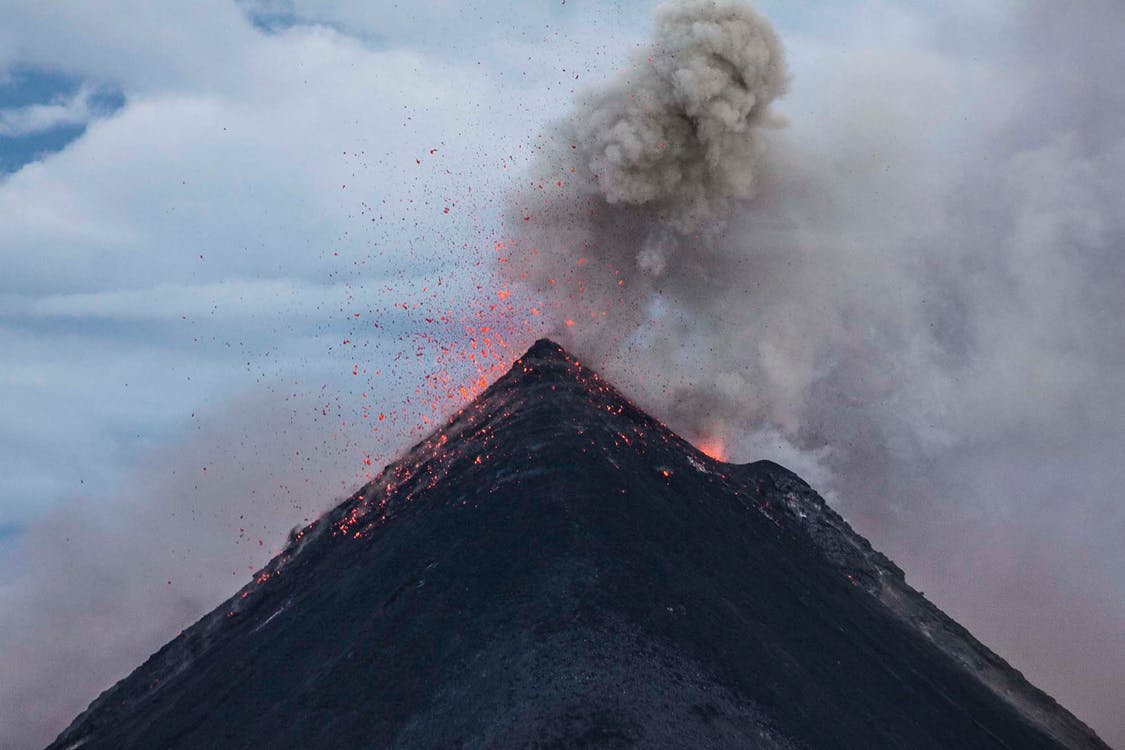 Volcanoes are not the only example of natural explosions occurring on Earth. There are other examples on Earth like geysers and hot springs. But natural explosions, on a completely different scale, can also occur in space...

There are on-going explosions happening in space in the shape of gamma-ray bursts and supernovas. Gamma-ray bursts are extremely energetic forms of electromagnetic radiation, thought to occur when a black hole is formed by a type of supernova. There are two types of supernova. The first is when a star - which is orbiting around a companion star - explodes after grabbing some material from the companion star. The second type is when the most massive stars reach the end of their life and collapse before exploding. Not all dying starts result in a supernova though. The sun, for example, does not have enough mass and instead will expand before fizzling out to become a very small star called a white dwarf.

Supernovas are, therefore, believed to play a key role in creating life on Earth since the massive stars that go supernova also create the heavy elements required for life such as oxygen, carbon and nitrogen. They do this via nuclear fusion in their cores, where the high temperatures help fuse hydrogen and helium into heavier elements. This is the scientific basis behind the phrase: “we’re all made of stardust”.

To learn more about nuclear fusion and how it differs to nuclear fission, take a look at the video below:

Humans have, of course, also contributed to the destroying power of explosions, particularly in the modern age with the advancements in science and technology. In some cases, explosions were accidental as a result of a malfunction. The Hindenberg and R101 airship disasters for example in which a series of incidents led these hydrogen gas-filled structures to rapidly catch fire.

But perhaps the biggest cause of man-made explosions is the development of bombs which have featured in many wars and attacks. All bombs, along with other explosive military weapons, use an exothermic reaction (which releases heat) of an explosive material to provide a violent release of energy. In order to achieve this reaction, different techniques are used, such as the chemical reaction of explosive materials. Modern bombs have also made use of nuclear fusion (the same process that occurs in stars to create heavy elements). But all nuclear bombs use the reverse process known as nuclear fission, in which an atom decays into smaller parts releasing a large amount of energy in the process. The most infamous examples of nuclear fission bombs are the atomic bombs dropped on Hiroshima and Nagasaki, Japan at the end of the Second World War, killing and injuring thousands of people.

That said, the same principle of using an explosive device can also result in a beautiful display. Fireworks are basically a colourful missile, except that they explode in a controlled and pretty way! 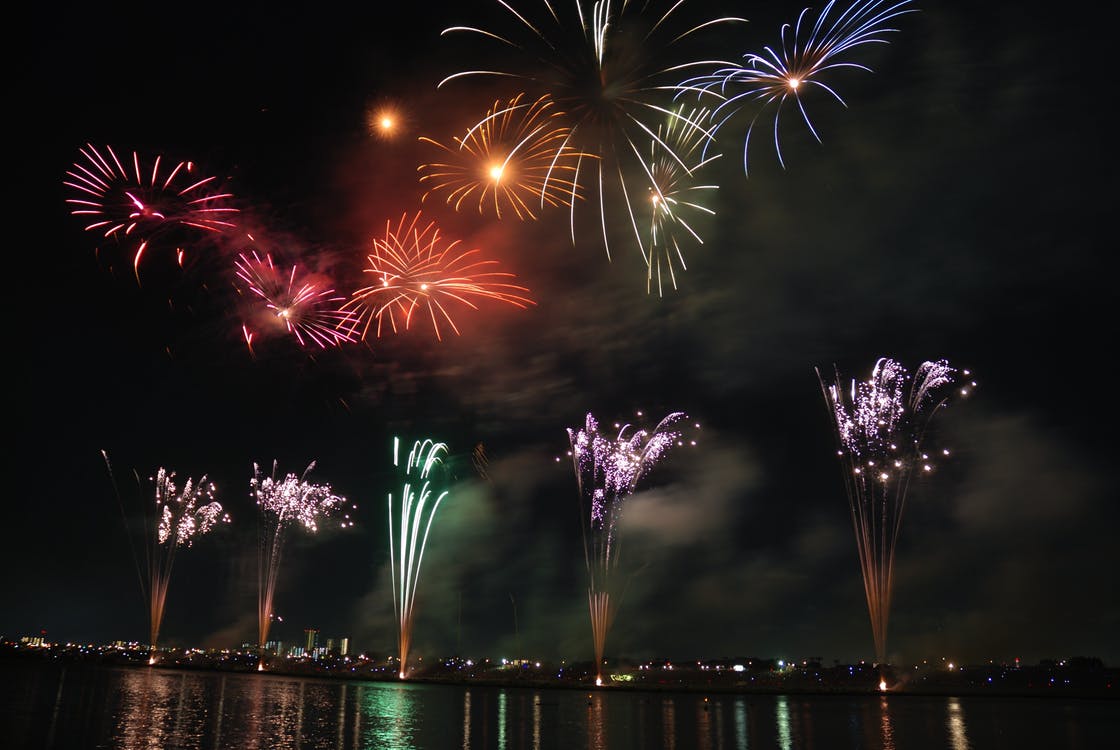 Given the laws of probability, things are much more likely to be disorganised than organised. Some of us might have heard of the term entropy and how it always increases. But what does entropy has to do with explosions? Well, entropy can be interpreted as the degree of disorder or randomness in a system, and explosions are an extreme example of disorder! If you want to take a deeper look at what entropy is all about take a look at the video below:

So what's the verdict?

While explosions (both natural or man-made) can result in devastation and mass loss of life, when used in a controlled manner, they can actually be beneficial. Man-made explosives can be put to good use in our everyday lives as can be seen in (refer to later resource here).  And in nature, volcanic explosions provide nutrients to the surrounding soil, and some explosions in space have led to the development of life (e.g. supernova explosions). Therefore, although we should be wary of the power of explosives and, in particular, of our own contribution to their development, next time you think that explosives are always destructive, remember: we’re all here because of them!

How to make a supernova on Earth

Researchers from the University of Oxford are using the largest, most intense lasers on the planet, to for the first time, show the general public how to recreate the effects of supernovae, in a laboratory.

4 things that wouldn't exist without explosions

90% of Mount Rushmore was carved with dynamite!

90% of Mount Rushmore was carved with dynamite!

Take a look at the science (and the implications) behind one of the most explosive ideas in human history: the atomic bomb.

Enduring an epic explosion: 6 creatures that could survive a nuclear bomb