Why we should talk to children about race

Amanda Williams, Lecturer in Psychology of Education at the University of Bristol, discusses the importance of talking to children about race - and why taking a "colourblind" approach is not the best way to promote equality and reduce racial prejudice. 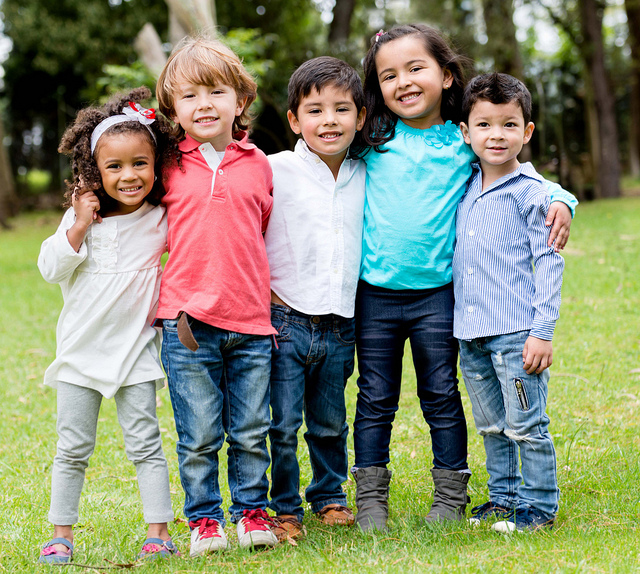 It’s a situation that many parents dread. Encountering a black man in the street for the first time, a white child might loudly ask something like: “Mummy, why does that man have dirty skin?” After cringing, shushing, or offering a distraction, parents may wonder where this kind of question has come from, how to deal with the situation or indeed avoid it in the future.

From a surprisingly early age, children can distinguish between faces from different racial groups. By the time they are three months old, experiments have shown that white, black, and Asian infants tend to look longer at faces from their own racial group or familiar racial groups compared to faces from other, less familiar racial groups. By three to four years old, children can consistently and accurately identify others by race. The ability to differentiate between people on the basis of race improves with age, with teenagers and adults automatically and effortlessly categorising others on the basis of skin colour.

Choosing to be colourblind

In many societies there is a widespread belief that individuals should receive the same treatment regardless of their race, ethnicity, gender, and ability. Partly in an attempt to appear egalitarian, many adults adopt a “colourblind” approach to race – avoiding mentioning race under the guise that if one doesn’t “see” race, then one cannot be considered racist. For example, in studies using a photo identification game, white participants asked to identify a particular face from an array of faces are less likely to use race to describe the faces, particularly when paired in the task with a black partner.

The norms enforced by this behaviour have now become so entrenched that adults tend to find situations that force them to talk about race extremely uncomfortable and anxiety-provoking, leading to a complete avoidance of the topic in social interactions.

Even when interacting with their young children, parents avoid race. In one study that observed the way parents read a storybook created to raise issues about race relations and racial prejudice with their four to five-year-olds, the majority of parents tended not to mention race, despite it being the theme of the book.

But ignoring race does not make it go away. Like adults and older children, young children are aware of race even if no one seems to be talking about it. This may lead young children to ask questions about racial differences, which are sometimes embarrassing and untimely, in order to gain a better understanding of the world around them.

Only after having acquired a better understanding of social norms regarding race, at around ten years old, do children also begin to show colourblind behaviour and avoid using race to identify the target in a photo identification task. Like adults, older children avoid mentioning race even at the expense of how well they might perform in the task at hand.

But taking a colourblind approach to race is not the best way to promote equality and reduce racial prejudice. Studies with white people who avoid talking about race show less friendly behaviour when playing a photo identification task with a black partner compared to a white partner. Like adults, nine to 12-year-olds also tend to find situations where they have to talk about race uncomfortable, nerve-wracking, and unpleasant.

But if colourblindness – and the tendency to avoid talking about race – impacts on relationships between diverse people, what approach should we take in order to resolve racial inequalities? The answer lies in embracing and celebrating our racial differences instead of minimising or even altogether ignoring them.

Fully recognising the multiculturalism in our society appears to be a better strategy. For example, in one study children who were read a story that placed value in racial diversity were found to be more likely to identify acts of racial discrimination and more likely to sit next to racially diverse peers in the school lunch room. In another study, white adults who adopted a multicultural approach (as opposed to a colourblind approach) showed less prejudiced behaviour when conversing with an Asian partner about racism and diversity.

Our concerns about discussing race can be reduced by placing more value in racial diversity, resulting in less stressful and more successful interactions with people from racial groups different from our own. As a caveat, most of the research mentioned in this article has focused primarily on the reactions of white participants. So there is more work to do researching attitudes and behaviour in diverse contexts with individuals who identify as racial minority group members.

For children, curiosity about their surroundings and the people they meet comes naturally. Rather than brushing aside children’s questions about race in an attempt to avoid social embarrassment, we ought to embrace and celebrate the differences that make us unique, remarkable, and that colour the world we live in.

Talking with children about race from an early age may not only derail embarrassing questions, but may, more importantly, serve to increase children’s comfort when interacting with people from different racial and ethnic groups – and increase the comfort of those they are interacting with too.

Given that we live in a society that is becoming increasingly diverse, children will be expected to interact with individuals from many racial and ethnic backgrounds. Children need to be prepared for this future – one way to do this is to encourage them to see this diversity as a positive feature of their worlds. It’s time to talk about race.