Pokemon and love- how a simple knot has tied them together

Love is a knotty subject – it's difficult to describe without getting tangled up.  This might be why love – whether it be romantic love or love between friends and family – has long been thought of as a knot. Dr Grace Egan explains more.

Many different cultures use the knot as a symbol of love.  In East Asian folklore, the 'Red String of Fate' is said to tie soul mates together.  It's an image that still appears in Japanese culture, from art and film to the red 'Destiny Knot' item in Pokémon. 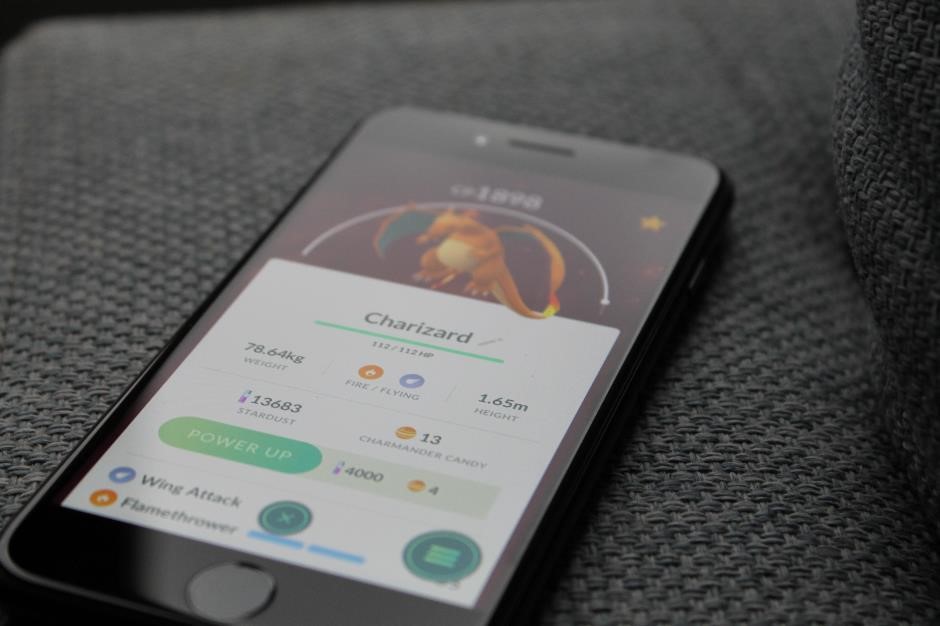 In Northern Europe, pre-Christian Celtic and Nordic cultures used knots for practical purposes (like fishing) and to symbolise ties between people.  These ancient designs weave in and out so that you can't see a beginning or end.  In modern mathematics, these knots are useful because they tell us about symmetry.  When it comes to emotions, the symmetrical and self-contained knot can stand for the shared feeling between people in love, and the everlasting togetherness they hope for.

Across Europe, pairs of objects – like tree branches, hair, ribbon, and rings – were tied around each other as a sign of the bond between two people.  Real, ornamental knots were given as Valentine's Day gifts in Britain in the 1600s.  As well as real knots, rhymes about love knots were written on paper, in the shape of complicated labyrinths.  The rhymes, like the lines of the knot, loop round without an end point.  Part of the poem below reads 'This is love and worth commending, Still beginning, never ending'. 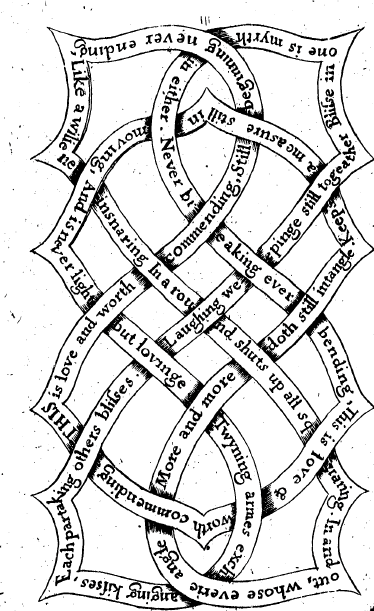 The shape of the knot differs from place to place, but in the English tradition, the 'true love knot' became popular as an idea put into words.  Lots of poets used the 'true love knot' to symbolise love's complexity.  Robert Herrick wrote a three-line poem about love knots in his book, Hesperides (1648):

Thou sent'st to me a true love-knot, but I
Returned a ring of jimmals to imply
Thy love had one knot, mine a triple tie.

A 'jimmal' or 'gemel' ring is usually a pair of linked rings.  Herrick wanted to do better than that, though, so he made a triple ring with words.  The poem's shape reflects the 'triple tie' of the ring – it's three lines long, and the ends of the lines are a triplet rhyme ('I', 'imply', 'tie'). 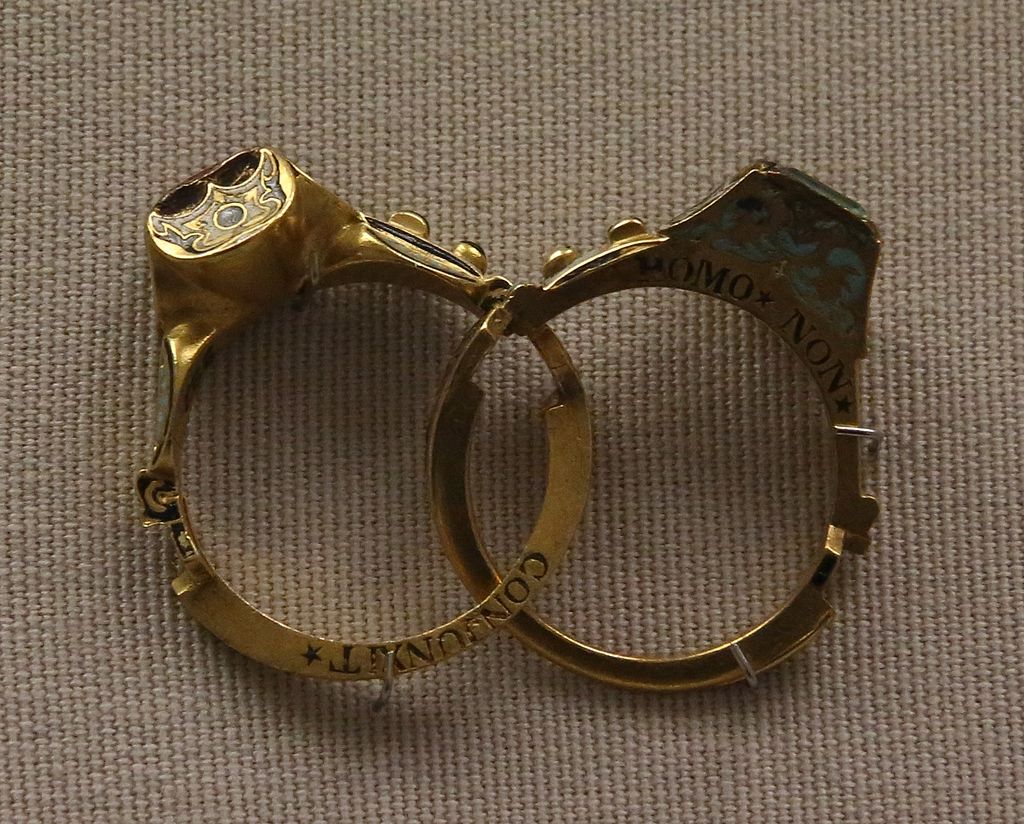 A gimmel ring with the hoop opened - displayed at the British Museum.

Love me, love me knot

But is being 'tied' in love's knot a good or bad thing?  Aren't knots things that get in the way?  Is being tangled or lost in a never-ending maze really what love is about?

You might have heard the expression 'tying the knot' when a couple gets married – but it sounds like the marriage knot and the 'true love knot' might be different ... 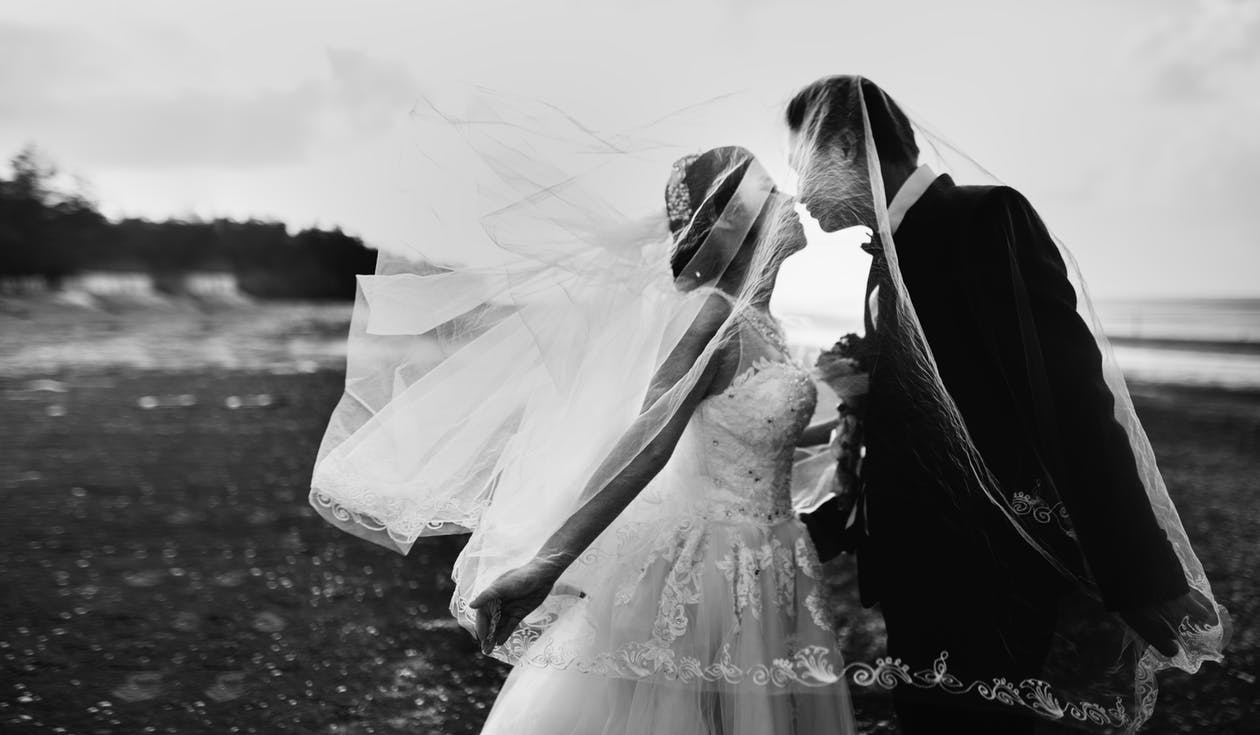 In fact, the 'true' part of the 'true love knot' comes from Old English, meaning loyal.  When two people get engaged, sometimes we say they are 'betrothed'.  The 'troth' part of 'betrothed' has the same root in language as the 'true' in 'true love'.  Being 'betrothed' means you've promised your loyalty.  'Troth' is also linked to 'truce', which now mostly means an agreement to stop fighting.  But 'truce' used to mean any kind of pledge or promise, including ones made between lovers.  So 'true love' used to be about promising to be loyal, rather than about finding 'The One'.

The medieval poem Sir Gawain and the Green Knight explores the dangers of accepting a love knot when doing so will cause divided loyalty.  Sir Gawain has been challenged by the magical Green Knight to try and survive being chopped on the head with his green axe. Gawain travels to meet the Green Knight, stopping on the way to stay at castle Bertilak. Gawain then meets an unexpected challenge: Lady Bertilak.  While her husband is out hunting, she tries to give Gawain gifts that would make a love 'tie' between them.  Gawain accepts Lady Bertilak's 'girdle' – or 'love lace' ('luf lace') – which she says will protect Gawain against the Green Knight.  It isn't something he's supposed to have: accepting the gift is a betrayal to his host.  It's also not what a good Christian knight was supposed to do because to meet the Green Knight honestly, Gawain shouldn't have magical protection.  In the end, the Green Knight turns out to be none other than Bertilak in disguise.  Gawain feels ashamed of hiding the 'love lace'.  When he gets back to Camelot, all the other knights agree to wear a green sash, like the girdle, to remind them to be honest.  A group or team wearing a knot together was a symbol of friendship in medieval times.  If you've ever made or worn a friendship bracelet, you're part of this tradition!

The 'figure-eight bend' is one form of the 'true love knot'.  It's two figure-eight loops, intertwined.  The further you pull the two ends apart, the tighter the knot gets.  This made the design a good symbol for love growing even when loved ones are apart.  It's for this reason that in nineteenth-century Sweden, the figure-eight was called the 'Friendship Knot'.

And yet, the figure-eight knot can be loosened.  Another name for the figure-eight is the 'Savoy knot'.  This name comes from the Savoy family badge, which has a picture of the knot and the motto: 'It tightens, but doesn't constrain'.

Maybe this is the heart of the 'true love knot', in its ideal form.  It's a reminder of what good, loving relationships can be: supportive, without being suffocating.  They hold you up, without tying you down.