Many people think ancient Rome was one of the most liberal societies ever when it comes to sex. After all, famous movies such as Gladiator and TV shows like Spartacus, have a lot of sex scenes. If you go to a museum, the first thing you’ll notice is how Romans liked their statutes naked. But was it really that simple?

The Roman take on sex and sexuality was very different from ours. The Romans were more relaxed about male than about female sexuality and a lot depended on what class of society you were in. As you would expect, slaves were less free than freeborn citizens.

Prostitution was legal. Sex with prostitutes was common and not frowned upon. Even one of the most conservative bigwigs, the Roman traditionalist Cato the Elder said it was fine for a man to visit a brothel sometimes (as long as he didn’t overdo it).

At the same time, showing affection in public was a sensitive issue. According to one source, the very same Cato had another politician stripped of office for kissing his wife in public!

Augustus, the first Roman emperor, was very reserved when it came to sex. He passed a whole set of laws to help families having children. The laws gave benefits to those who married and had three or more children and fined people who were able to marry but refused.

Adultery was severely punished. If a man was caught having sex with a married woman, he was tried before a criminal court. If found guilty, both the woman and her lover had to pay a large sum of money and were expelled from the city to two remote (and different) islands.

To show that he meant business, Augustus banished his own daughter and granddaughter into exile on a charge of adultery. Hardly the family man!

Roman same-sex couples held ceremonies to formalise their relationships as marriage. The Emperor Nero celebrated two marriages with men, once playing the bride and another time the groom.

It was tough being a woman in Rome.

Respectable Roman women had to be careful what they wore. Too colourful or too short a dress could be suspicious and risked the accusation of seducing men into adultery.

Rome was a patriarchal (a term that comes from the Greek pater-father and arche-rule) society in which men ruled. Women couldn’t hold office or be elected into the government. In times of stress and instability, women were praised for helping the state in various ways, but they were often blamed if things went wrong.

For example, the Vestal Virgins were female priests (like nuns) who made a vow to serve the goddess Vesta as virgins. If a Vestal had sex, the Romans accused her of betraying the state she was supposed to serve and would bury the poor woman alive!

Historians think that many Vestals died this way on false charges as scapegoats. They were easy to point a finger at in times of crisis. 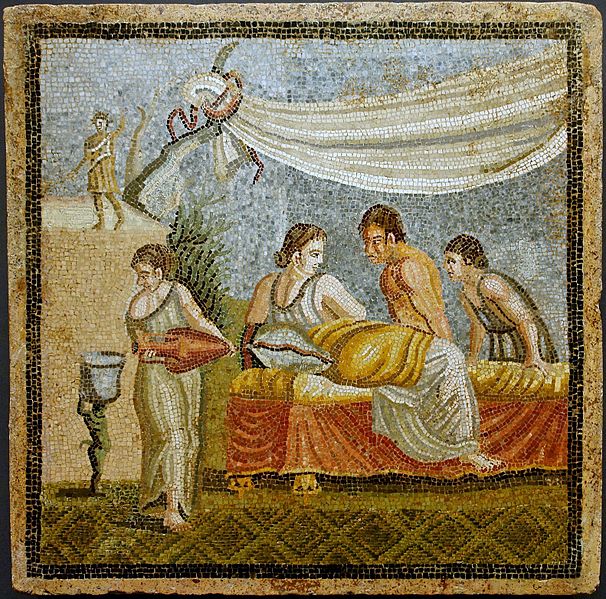 When it comes to homosexuality, one of the most interesting things is that there is no word in Latin for this modern term. Romans never thought of sexuality as an exclusive attraction to one sex alone.

But not all kinds of relationships were allowed. The essential thing was not sex, but social status. A man could have a partner of either sex as long as he or she was socially ‘inferior’, not superior or even an equal. So women (who were considered less equal), male slaves and prostitutes were fine, but getting with another male citizen was a no-no.

It’s interesting that a number of authors say that some Roman same-sex couples held ceremonies to formalise their relationships as marriage. The Emperor Nero celebrated two marriages with men, once playing the bride and another time the groom.

The Roman views of sexuality were radically transformed when Christianity became a state religion in the late 4th century AD.

Most Christian theologians rallied against sexual activity other than sex to have children in marriage. But the Roman religion which preceded Christianity (which Christians started calling ‘pagan’ religion) had a number of festivals where sexuality played a big part.

For example, on 15th February every year, groups of young men would strip down to loincloths (like underwear) to celebrate the festival of the Lupercalia. They sacrificed some goats and used their skin as whips for sexual rituals to promote fertility while running around the city.

Does it matter | who you love?