Race plays a big role in our society. But what is it? Is it just our skin colour or something more complex? Some feel we need it to understand events of the past, but it also causes conflict all over the world…

Does race matter? From a purely biological and genetic perspective, no. There are no divisions within the human species that can be classed as races. However, this hasn't always been the understanding in biology...

From the time of early exploration, naturalists (who studied living organisms) and biologists have tried to classify the different human populations they came into contact with as belonging to certain racial groups. This was done according to physical features, which were usually chosen without logical reason.

In biology, physical characteristics are known as phenotypes. Phenotypes are a combination of your genotype – a collection of genes that determine one particular feature – and your environment. So, for example, your weight is a phenotype affected by both your genes and your diet. 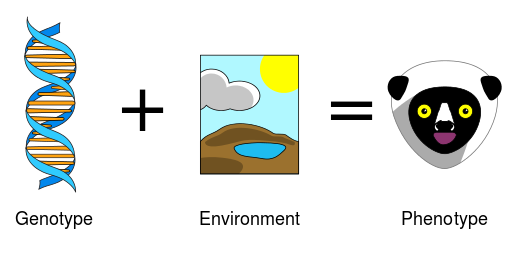 Your genes and your environment make you who you are. Image credit: Keith Chan via Wikimedia Commons

Early racial divisions in the 17th-18th centuries were based on physical features (usually skull measurements) linked to geographical region of origin. François Bernier, a French physician, was one of the first to categorise race this way, into Europeans, Far Easterners, Negroes and Lapps. Later, Johann Friedrich Blumenbach, a German physician and naturalist, named five races on the basis of skull profile: Caucasian, Mongoloid, Negroid, Malay and American. This gave rise to the ideas of monogenism and polygenism, which considered whether the different races all came from a single origin (monogenism) or from different origins (polygenism).

Unfortunately, differences in physical characteristics and supposed differences in moral character, came to be used to justify practices such as the slave trade and other examples of racism. The idea that the different races had originated separately, and that some were inferior to others, also made it easy for racism to thrive.

Blumenbach’s five skulls are labeled (from left to right) Tungusae, Caribaci, Feminae Georgianae, Otaheitae, and Aethiopissae. These were presented as examples of the five races: Mongolian, American, Caucasian, Malay, and Ethiopian.

Evolution and our journey out of Africa

In the 19th century, Charles Darwin presented his theory of evolution and concluded that all humans came from a single common ancestor.

Darwin recognised that we are far more similar than we are different. This has been confirmed by modern day genetic analysis. We now know that any human is about 99.5% genetically similar to any other human. Not only that, but people within populations show more genetic variation than those between populations. Sub-Saharan African populations show the greatest genetic diversity, which makes sense when we consider that humans evolved in Africa. Those who migrated out of Africa were smaller populations, and so carried with them only a part of the genetic diversity.

Evolution from a single ancestor has typically been portrayed as a tree, with different groups splitting off at different times through history, followed by no further mixture. In this way, Africans have been shown to have split off from the rest of humanity a long time ago, and therefore are a distinct lineage, or “race”.

A more modern way of looking at the evolution of humans is known as the ‘multiregional hypothesis’. This suggests that several waves of expansion out of Africa occurred at different times, and there was gene flow back and forth between populations.

Gene flow, or gene migration, is the transfer of genes from one population to another via immigration of individuals. Take a look at the diagram below:

So what is race, and how is it actually defined?

On a biological level, it is a division lower on the scale than sub-species. All humans belong to the same species and sub-species, Homo sapiens.

A biological race, by definition, is a genetically distinct division, usually across some geographical boundary. That said, because of the very gradual genetic variations across geographical areas (called ‘clinal’ changes), no human “races” fit this definition.

There aren’t any single genetic differences between races, where the one race has one variant of a gene and the other has another. In fact, as shown by Craig Venter and his team when they sequenced the human genome, it's possible for a Korean and a white American to be more similar to each other genetically than two white Americans.

What we perceive to be physical racial differences are simply a result of adaptations due to natural selection over thousands of years. The subset of genes to which these differences are due is too small and is not variable enough to be classified as racially distinct. In light of this, there has been a call for the term “race” to be replaced by “ancestry” in the biological literature.

If you want to learn more about the science of differences in skin colour, take a look at the video below by Angela Koine Flynn and Tomás Pichardo-Espaillat:

Or is it a social idea created by people?

Generally, we understand each other when we talk about race – so if it isn’t biological, what is it?

Since race has been separated from biology, scientists and philosophers have argued that race is a social construct. A social construct is an idea that is created and accepted by society or a social group. Some important examples include government, laws, and marriage, as well as race and gender. While all these things are socially constructed, they still have a big impact on our daily lives.

Also they're not fixed. Over time, society’s concept of what a government is for, how they should be formed and the power they have, has changed. Likewise, our understanding of race has changed a lot over time.

Does that mean that race isn’t real?

It all depends on how you define 'real'. Race isn’t real in the sense that an apple is real, or a car is real. But there are lots of other social constructs that we would most definitely say are real. The value of money is a social construct, created by society so we could trade goods, and I think we would all agree that money is very real.

However, there is a question over whether race is ‘less real’ than things like apples and cars. And if we think it is less real, does that mean it’s less important? Should we stop using the word 'race' altogether?

Writer, Jenée Desmond Harris explores this idea further in the video below:

Why do we need to talk about race?

If biologists aren’t using the term anymore, should we? Here are some of the key arguments for and against this.

For example, there are certain genetic markers, such as skin colour, that we use to identify race, but not every person of the same skin colour is part of the same race. Plus, there are people within races that have variation in skin colour. There are lots of other examples of physical traits, such as eye shape and hair texture, that only complicate this further.

However, other philosophers, called race constructivists, say that we should keep the concept of race.

Unfortunately, society already labels, and sometimes discriminates against people according to racial categories. Race constructivists argue that we need the term race so we can make social and political progress against racial injustice. We've seen some of the negative effects that racism can have in the recent police brutality cases in America, and the development of the Black Lives Matter movement that followed. To learn about this, take a look in the additional resources at the '#BlackLivesMatter' video.

It’s quite clear that it would be impossible to entirely remove the concept of race from society, but many believe there is work to be done to ensure we are only using concepts of race to fight racism, and not to divide people further.

Race and ethnicity – what’s the difference?

While race is based upon perceived physical traits, ethnicity is linked to cultural traits (for example, language, religion, forms of dress and customs) and shared group ancestry. In many ways, ethnicity is more flexible than race, as people can choose the ethnicity they most identify with based upon their ancestry, geographical location and culture.

Ethnicity is a term much more commonly used by governments, healthcare and in the legal system to identify different groups. Many people believe it's a better term to use as it's not influenced by a history of conflict and segregation. If we were to eliminate our concept of race, ethnicity may be a good substitute as it would still enable us to track social progress. Employers and other institutions, like universities and schools, use ethnicity data to ensure they are being fair in their recruitment and selection processes, and that people from all backgrounds are given equal opportunities.

Kofi Annan, Nobel Peace Prize winner and previous Secretary-General of the United Nations, once said: "We may have different religions, different languages, different colored skin, but we all belong to one human race."

Kofi Annan, Nobel Peace Prize winner and previous Secretary-General of the United Nations, once said: "We may have different religions, different languages, different colored skin, but we all belong to one human race."

It's pretty hard to define race, and so the term 'ethnicity' is generally used by governments, businesses and public services. The UK government collects data about its population every 10 years in a record called a census. It was last performed in 2011. Take a look at what ethnic diversity in the UK was like then...

Ethnicity in the UK

This map shows the proportion of each ethnic group in the UK from the 2011 census. How do you think these numbers might have changed since 2011? Is it important that we collect data about ethnicity? 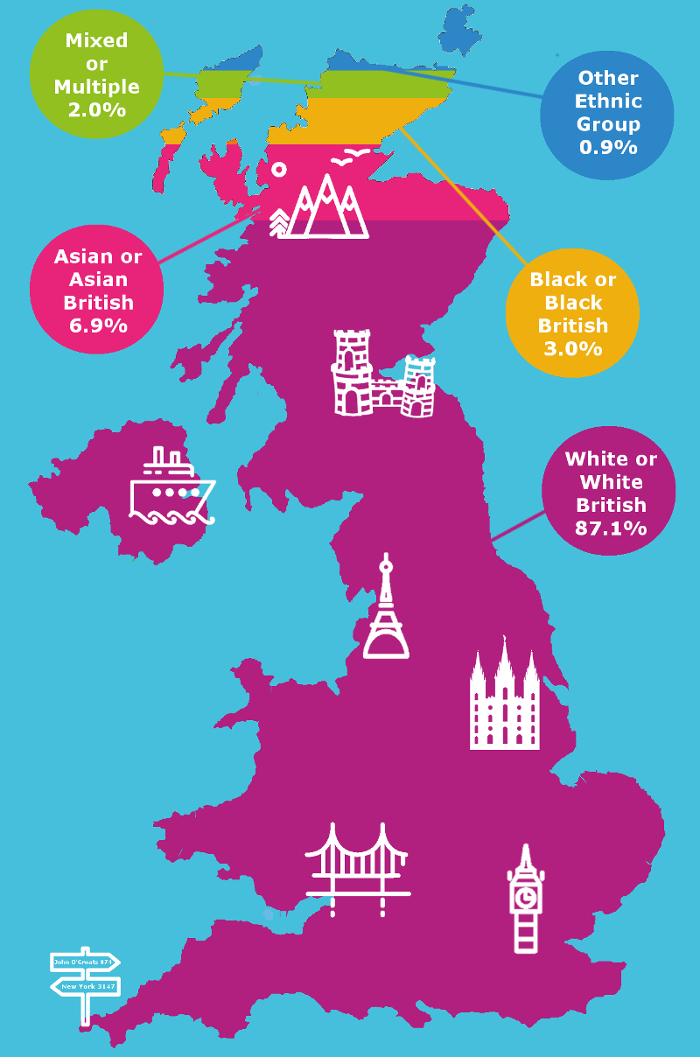 This graphic shows the percentage of White and BAME (*Black, Asian and Minority Ethnic) populations at different ages in the UK. There is more ethnic diversity amongst young people than amongst older people, why do you think this is? 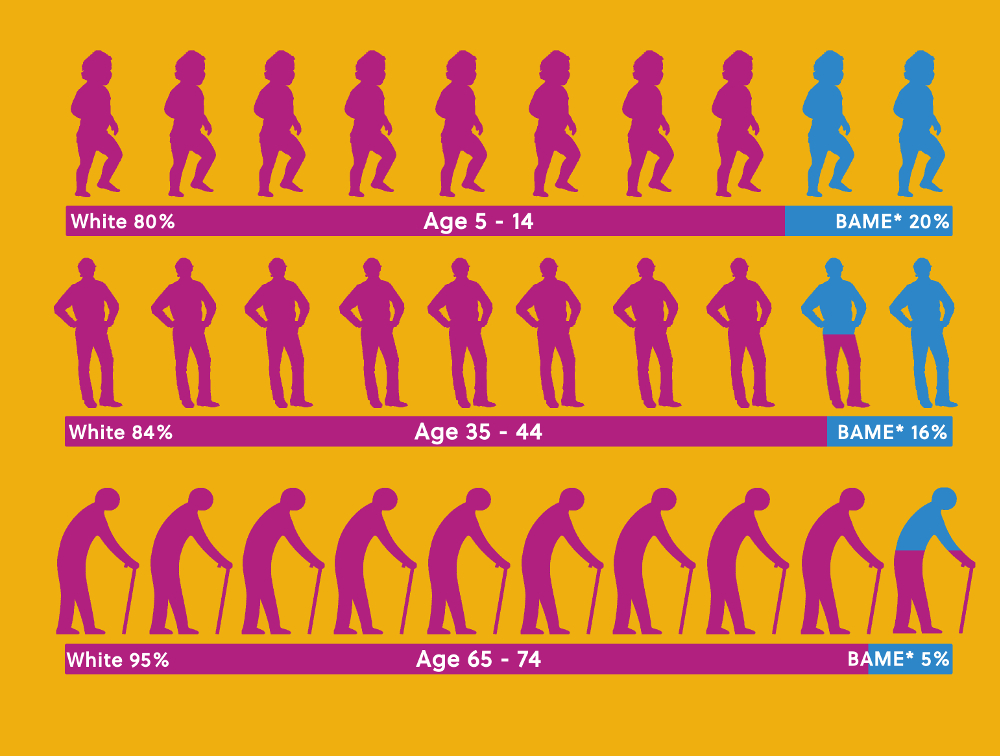 These maps of London shows the percentage of Black, Asian and White populations in each of the London Boroughs. You can also see the Boroughs with the highest and lowest proportion of each ethnic population. How do you think these maps would have looked 50 years ago? How might they look in 50 years time? 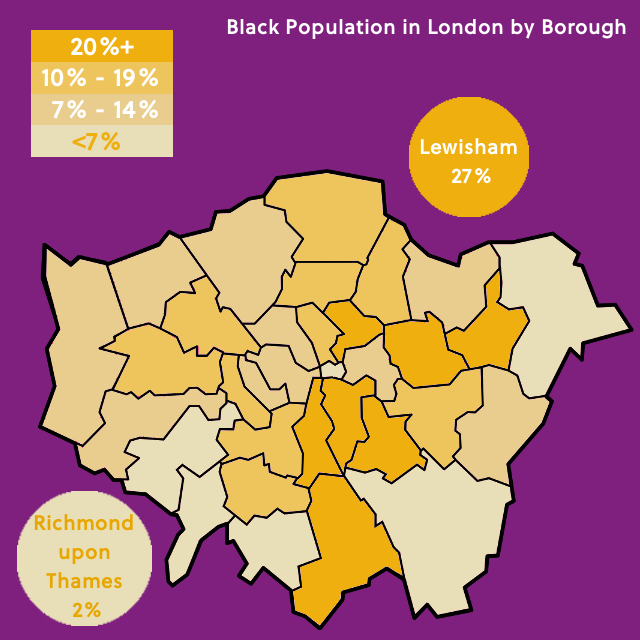 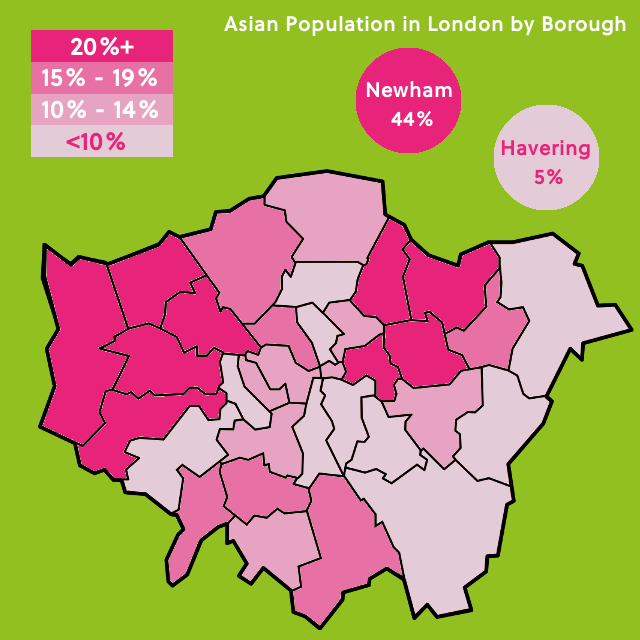 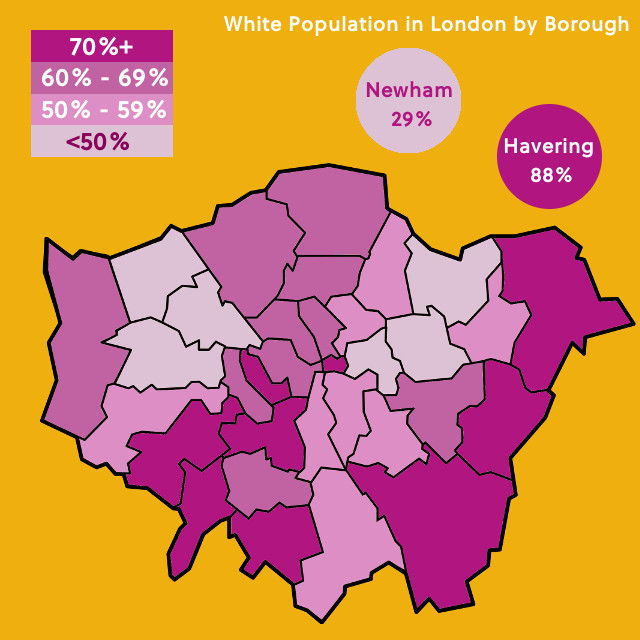 5 multiracial stories: through their eyes