Scientists seem to have discovered something blocking the light from a distant star - what are the odds of it being an alien megastructure? Anders Sandburg from the Future of Humanity Institute and Oxford Martin School at the University of Oxford discusses the possibilities...

Right now the star KIC 8462852 is really hot – and not just because it's a F-type star, but because the Kepler space telescope has discovered that it flickers in a highly unusual way, as if something is obscuring it. These dips in the light are different to what you would expect from planets blocking the star.

Scientists are failing to come up with an explanation for the phenomenon based on natural astrophysical processes, so attention has turned to the potential of an alien megastructure blocking the light. But what would such a structure be exactly and how likely is it that Kepler has spotted one?

It is true that dips in the light from the star are odd, both in shape and timing. They are unlikely to be caused by a surrounding cloud of dust, as the star is too old to have such a planet-forming disk. But what about a storm of comets? They are actually not very good at obscuring stars, so it is not all that likely either. Fragments from a planetary collision might work, except that such events are so rare that we would not expect to see any with Kepler.

The lack of a simple explanation has made a lot of people quietly (or not so quietly) ask whether this could be an alien megastructure, known as a Dyson sphere. 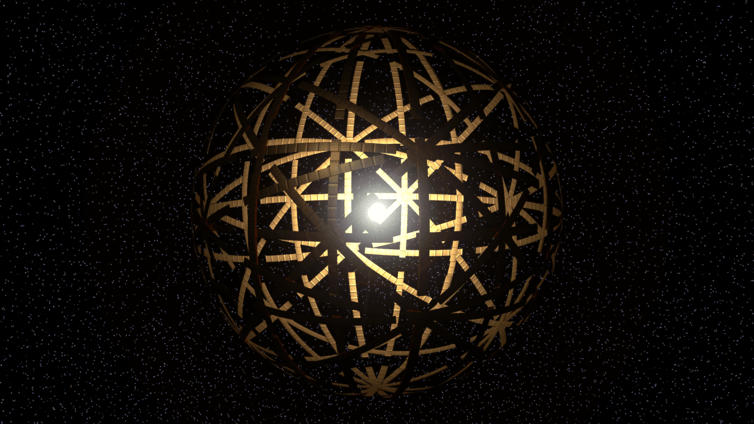 Concept of a Dyson sphere. Kevin Gill/Flickr, CC BY 2.0

The Dyson sphere was first described by Freeman Dyson in the 1960s, who argued that a technologically advanced alien civilisation would use more and more energy as it grew. As the biggest source of energy in any solar system is the star at its centre, it would make sense that the civilisation would build orbiting solar panels to try to capture it. Such structures would take up more and more space until they eventually covered the entire star like a sphere. However, a complete sphere would be invisible to Kepler as it would absorb all of the light from the star, so signs of this would have to come from something currently under construction.

Could this be the case? It's unlikely. If a civilisation builds a Dyson sphere, the sphere is unlikely to remain small for a long period of time. Just as planetary collisions are so rare that we should not expect to see any with Kepler, the time it takes to make a Dyson sphere is also very short: seeing it during construction is very unlikely. Even if we knew a Dyson sphere would eventually be built in a solar system the chance of actually witnessing it happening is low.

How do we know this? To build a Dyson sphere, one would need to disassemble a nearby body, like a planet, to provide the material for the solar captors. In a recent paper written with a colleague, we calculated that disassembling Mercury to make a partial Dyson shell could be done in 31 years. One way of doing this would be to mechanically disassemble the planet, much like we do in our aluminium and steel industries. From these industries, we know a lot already about the energy cost of such work, so the trick is to use already mined material to build more mining equipment and solar collectors to power it, achieving an exponential feedback loop.

The time it would take to disassemble any terrestrial planets is not much longer than for Mercury, while the gas giants would take a few centuries. Our aim in the paper was to show that using a small fraction of the resources in the solar system it is possible to harness enough energy to launch a massive space colonisation effort (literally reaching every reachable galaxy, eventually each solar system), but the important point is that this kind of planetary engineering is fast on astronomical timescales. 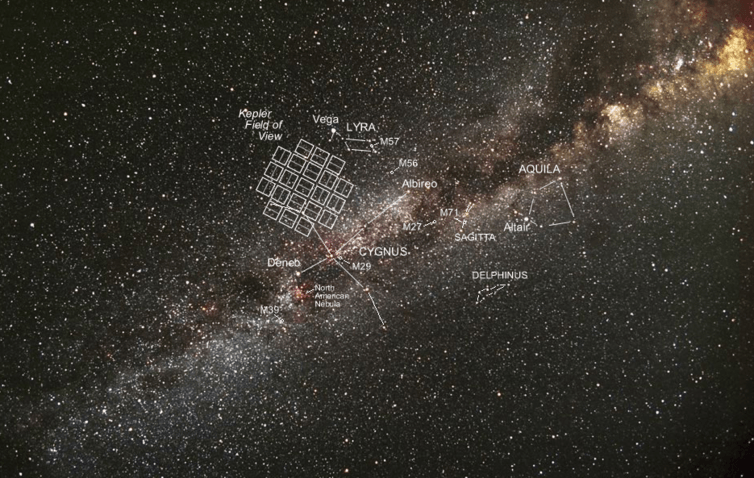 Image showing the region Kepler can see, where the mysterious star is located. NASA

Over the history of an F5 star like KIC 8462852, even 1,000 years to build a sphere is not much. Given the estimated mass of the star as 1.46 solar masses, it will have a lifespan of 4.1 billion years. The chance of seeing it while being englobed by a Dyson sphere is one in 4.1m.

This is the probability assuming there will eventually be a sphere. Presumably only a few stars would have aliens and will be hidden this way, so the actual probability of seeing one in the process is much lower. Of the 150,000 stars Kepler watches we should not expect any of them to be in this state.

Another possibility is that the structure is an abandoned, unmaintained Dyson shell. Such a structure would likely start gravitationally clumping together into streams of wreckage, which makes this sound like a promising explanation – at first. But the timescale of coalescing into a junk planet is likely faster than natural planetary formation timescales (100,000 to a few million years) since the fragments involved would be in nearly identical orbits from the start. So the probability that we are looking at Dyson remains is still low.

But it is indeed several orders of magnitude more likely for us to see the decay of the shell than its construction. Like normal ruins, these often hang around far longer than the time it took to build the original structure.

What about if the aliens were building the sphere extremely slowly? This is in a sense what we are doing here on Earth (disassembling it to a tiny extent) by launching satellites one by one. So if an alien civilisation wanted to grow at a leisurely rate or just needed a bit of Dyson shell they could of course do it.

However, if you need something like 30 quintillion Watts (which could correspond to a 100,000km collector at 1 astronomical unit around the star) your demands are not modest. Dyson originally proposed the concept based on the observation that human energy needs were growing exponentially, and this was the logical endpoint. Even at 1% growth rate a civilisation quickly – in a few millennia – need most of the star’s energy.

In order to get a reasonably high probability of seeing an incomplete shell we need to assume growth rates that are exceedingly small. While it is not impossible, it seems rather unlikely given how life and societies tend to grow.

Dyson shells are not the only megastructures that could cause intriguing transits. Research has suggested that an alien civilisation could, for example, sort asteroid material using light pressure, engineer climate using shades or mirrors, or travel using solar sails. Most of these tools are small compared to stars, but Kepler might notice them if there were enough of them.

Another study has calculated the possibility of detecting stellar engines – gigantic mirror arrays for moving entire solar systems – based on light curves. But unfortunately the calculated curves do not fit KIC 8462852 as far as I can tell.

In the end, we need more data. The stakes are high. If there is no intelligent life in space it means either that we are very lucky – or that intelligent species die out fast. But if there is (or was) another technological civilisation it would be immensely reassuring: we would know intelligent life can survive for at least some sizeable time.

But in truth, we'll probably instead learn that the ordinary processes of astrophysics can produce weird transit curves, perhaps due to strange objects (remember when we thought hot Jupiters were exotic?) After all, the universe is full of strange things, which means it's awesome that we get to live in it. But it makes sense to watch the star, just in case.