When the world is not enough: how to find another planet to live on

Dr Eamonn Kerins (University of Manchester) discusses the latest research on Exoplanets. Could we really move to a land far far away from our own Solar System? 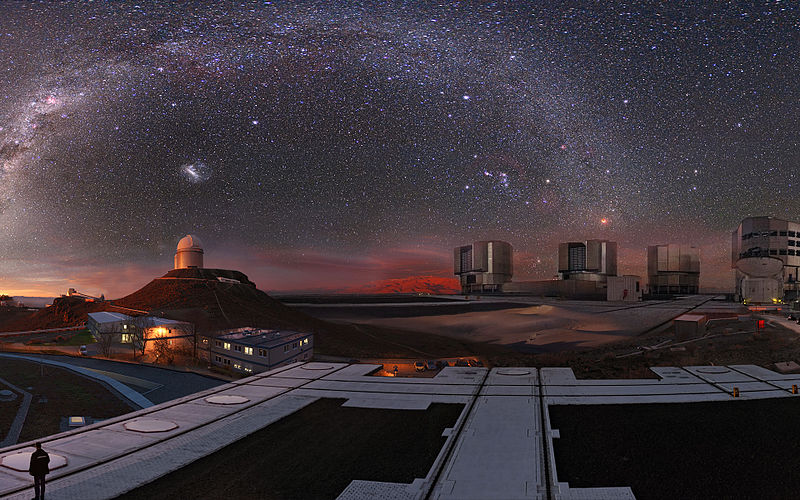 The European Southern observatories and its Headquarters. ESO/M. Kornmesser via Wikicommons CC BY 4.0

The seafaring explorers of the 16th century famously found many new homes for humanity in faraway, unknown corners of the world. While it may seem that such colonisation has since ground to a halt, some have argued it is only a matter of time before humans start moving to “exoplanets” in foreign star systems. But how close are we to such an expansion?

That’s what scientists Danielle George and Stephen Hawking set out to explore in a new TV programme, The Search For A New Earth, on BBC2. The programme, which launches on 11 September, will present the latest efforts to find these Earth-like exoplanets and consider what it would take for us colonise them in the future.

Exoplanets are very small compared to the stars they orbit and typically very far away – meaning we can’t actually see them with telescopes. Despite this, scientists have already detected around 3,600 confirmed exoplanets and another 2,400 candidates. However, we are unable to produce even simple images of the vast majority of them as their weak signal is typically drowned out by their much brighter host star. So how can we judge how habitable an exoplanet is when we may not even be able to see it with our largest telescopes?

Most exoplanets have been found using the transit method, which measures dips in a star’s brightness as a planet moves in front of its host star. This enables us to estimate the radius of the planet and the period of its orbit.

The properties of the host stars themselves are usually well known, which means that simple physics can help us to work out how far the planets lie from their stars based on their orbits. From this we get a good estimate of the temperature of the planet, at least at the top of its atmosphere.

The gravitational tug of the planet on its host can also be measured by looking for a Doppler shift in the light from the host star. The Doppler effect describes the change in the observed frequency of a wave when there is relative motion between the wave source and the observer. When this is measured for a transiting planet it gives us a precise measurement of the planet’s mass.

That’s a lot of information. But it gets better. We are now beginning to measure the chemical composition of a number of exoplanet atmospheres. While planets are transiting, their atmosphere is backlit by the star. On Earth, the process of “Rayleigh scattering” causes our sky to appear blue as blue sunlight is scattered much more strongly than red light. If aliens were to view Earth in transit against the sun they would see that our backlit atmosphere blocks blue light more than red, meaning they would know that Earth has a blue sky. 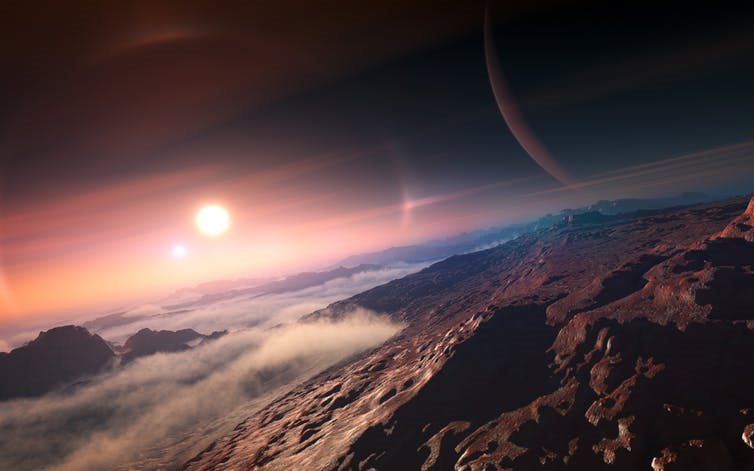 An exoplanet seen from its moon. IAU/L. Calçada, CC BY-SA

The same basic technique can also be used to measure light-absorbing molecules such as water, methane, oxygen, ozone or nitrous oxide. In principle, with instruments more sensitive than ours, aliens would see signatures from human-made atmospheric pollutants. They could then conclude that Earth may harbour an advanced civilisation.

New windows on the universe

Molecules including water, methane and oxygen have been detected in over 40 confirmed exoplanets so far and the list will very soon grow dramatically with the launches next year of NASA’s TESS mission and JWST, the successor to the Hubble Space Telescope. These will be followed in the next decade by the European Space Agency’s PLATO mission and possibly its planet characterisation mission Ariel.

Meanwhile, on the ground, the European Southern Observatory is building the Extremely Large Telescope. This will be able to collect ten times more starlight than any previous optical telescope and will be capable of probing the atmospheres of nearby Earth-like planets in unprecedented detail.

These facilities will enable us to start looking for molecules indicative of biological activity (bio-marker signatures) on nearby planets. Example bio-marker signatures could include strong abundances of combinations of molecules such as oxygen and methane, which react with each other on short timescales. On Earth their abundance is constantly replenished by living organisms.

There are of course many other factors beyond bulk planet characteristics that contribute critically to the success of evolved life here on Earth. The truth is that our descendants won’t know for sure that they’ve found Earth-2 until they try living on it. So, while we would not hand an empty map to our brave space explorers of the future, we are a long way from being able to guarantee them habitable accommodation.

And, let's be clear, the long journey time even to our nearest exoplanet neighbour, Proxima b, means that it is definitely a one-way ticket. Indeed, with current technology, this journey would take tens of thousands of years.

The alternatives that would allow us to travel within a single human lifetime involve mastering near light-speed technology. There are some ambitious plans in progress on this. Another approach would be to develop reliable long-term human hibernation techniques.

During their voyage, the astronauts also have to shield themselves from potentially fatal doses of cosmic rays. They must also avoid muscular and skeletal wasting, and cope with the psychological demands of being locked up for years in a large tin can. At their destination, they will also have to adjust to life as an alien without the advantages of evolutionary adaption that we enjoy on Earth. This is probably the greatest challenge of all.

All things considered, it’s one long journey for a man, one giant roll of the dice for mankind.

Could we live | on another planet?